An improved version of the Dual Eco system introduced earlier, operates in the Metrodom Őrmező residential complex. Dual Eco is more developed than traditional gas fueled central heating and allows for increased efficiency when compared to our earlier buildings, allowing for heating costs to be even more economical than what is found in our earlier buildings, thus driving heating costs further down. The advantages of the Dual Eco system will not remain a promise; the building and the technical contents guarantee the „BB – nearly zero energy need” rating.

Besides traditional condensing gas furnaces, air-air heat pump furnaces are also employed in the Dual Eco system. Traditional furnaces have been completely omitted in the Őrmező complex, both heating and hot water are provided by heat pump furnaces, without the emission of carbon dioxide locally or other polluting substances of any kind. With the energy extracted from the air and using a compressor, heat pumps increase the gas pressure in the appliance. This leads to a rise in temperature, which is then transferred to the heating circuit. During the summer period, the process is reversed and like in traditional air conditioners, compression is decreased thus cooling the water.

The different boilers are activated and produce hot water when they can deliver their power optimally, and in a way most conducive to producing hot water for heating, thereby driving heating costs down. The operation of the Dual Eco heating system is fully automatic. The different boilers turn on and off automatically depending on ambient temperature and operational load, residents will not notice these background processes.

No traditional radiators are installed in Metrodom Őrmező (except for the radiator towel dryers installed in the bathrooms for convenience purposes, providing enough heat to dry towels quickly even outside of heating season). Instead, the so-called surface heating is used whereby the surface used for heat dissipation is much larger than it is with traditional radiators, therefore the temperature of the water can be relatively lower, the production of which is significantly cheaper. Earlier, floor and wall heating were used, we abandoned these methods. As pleasant as a heated floor may be, floor heating is rarely an efficient way of heating in itself as some 30 percent of the floor area of an apartment is occupied by furniture, the bathtub, washing machine, etc., and often carpets are also laid on the remaining free surfaces. Additionally, heat drives microscopic dust upwards and the air is filled with invisible particulate matter. The same applies to wall heating. The facade, the very area where heating is probably the most important, no sufficient surface is available because of the windows and the cabinets placed along the walls. Furthermore, in wall heated apartments, nothing can be mounted on the wall as the heating pipes will be immediately punctured by drilling or nailing into the wall. Metrodom therefore opted for ceiling heating ensuring that the entire surface area of the ceiling can double as one huge radiator. The pipes run directly under the few-millimeter plaster except for a small area around the light outlet for hanging the lamps. You will be free to place anything on the floor, mount on the wall and furnishing will not be restricted by radiators either.

Heating and cooling
Making the best of the potential of the system, instead of hot water, cold water is circulated in the ceiling heating pipes during the summer period, thus cooling the apartments. Like heating, cooling is also controlled by the residents with the smart home system. Many dislike central air conditioning as energy consumption of the central unit remains the same even if it is used by only a small number of people, who will therefore pay a disproportionately high per capita cost. The many small and independent heat pump furnaces are activated one after the other, as needed. If only one or two apartments use air conditioning at a certain point in time, one furnace will be enough and costs of cooling low. Delicate operation is also a characteristic feature of ceiling cooling. Many dislikes traditional air conditioning for the freezing air circulated by noisy indoor units leading to sore throat and other inflammations of the sinuses. With ceiling cooling however, there are no ventilators, nothing stirs or blows the air. Warm air rises towards the ceiling, where it is cooled and then sinks, giving space to rising hot air again. Air conditioning in the apartment is therefore seamless and continuous, once the desired temperature is reached it is maintained automatically by the system making air temperature pleasant all the time. (Appropriate level of relative humidity is to be maintained, this can also be controlled via the smart home system, further information will be provided in the detailed building user manual or here). Additionally, the Dual Eco is completely maintenance-free, residents will not need to care about it or the cleaning of the appliance.

Control and metering
Air temperature is controlled by Metrodom’s smart-home system, temperature can be set either via the control panel or your smartphone. Manual setting is also possible, a digital thermostat is placed in each room and bathroom displaying current and desired temperature and two buttons serve for easy raising or lowering. Besides the built-in thermometers, the thermostats are equipped with humidity meters, the system will decide on turning heating on and off based on data supplied by these sensors. Measuring heat volume and the subsequent settlement are done the same way as in our other residential buildings with traditional heating systems, i.e. every apartment is an independent heating/cooling circuit, consumption is measured by meters placed outside of the apartment itself. If needed, heating/cooling can be turned off physically, by a single move.

Metrodom is committed to implementing low energy consumption, environmentally friendly technologies, we therefore guarantee under contractual responsibility „BB - near zero energy consumption” energy rating in all our buildings utilizing Dual Eco heating system. According to this rating, energy used for hating is minimal and at least 25% of it comes from renewable sources.

Dual Eco Plus – advantages in a nutshell 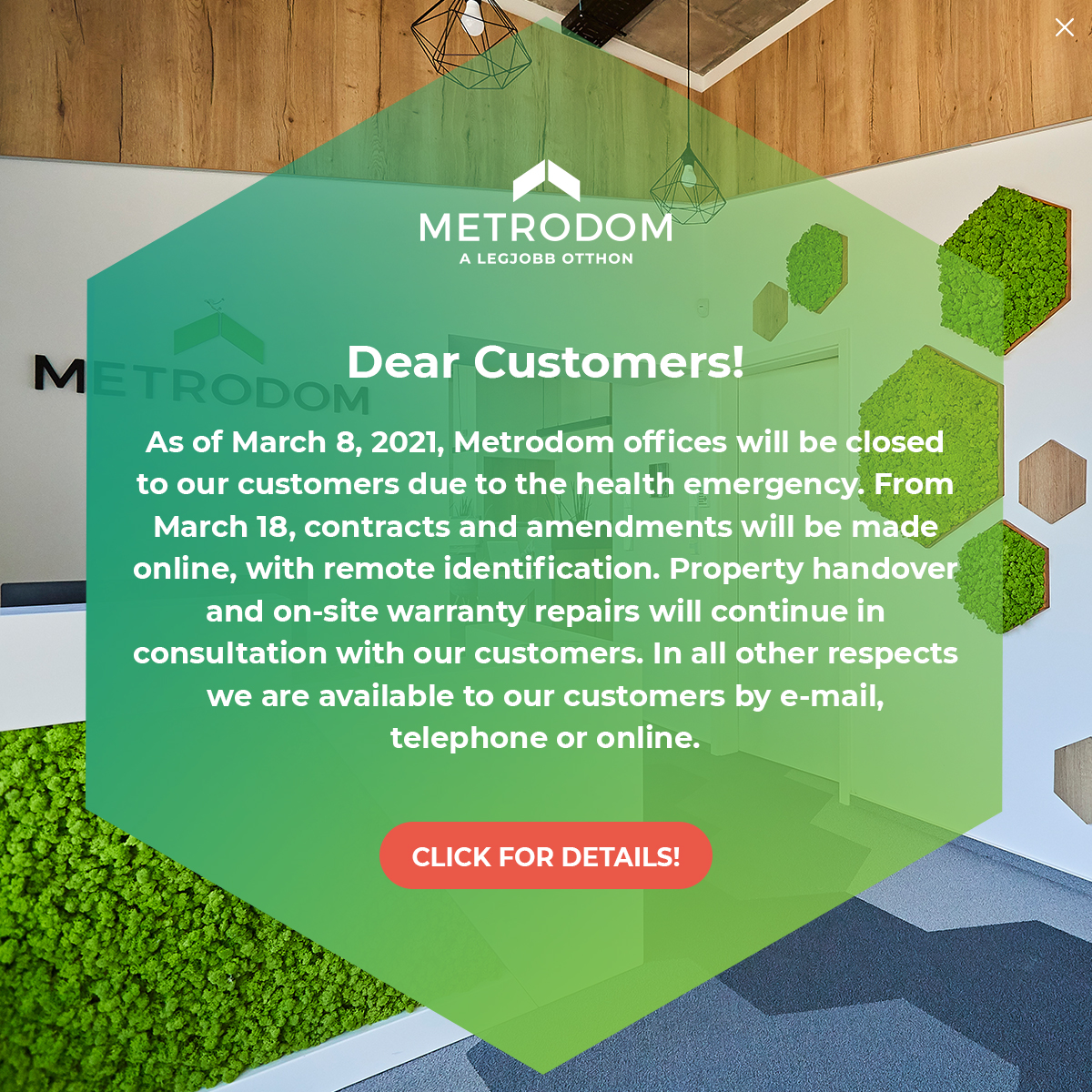